Filed under: News No Comments

We recently received an email from a viewer of our film telling us about her Jenny pilot grandfather. We’ve reproduced the conversation and adjoining photos for your enjoyment.

I was told by my mother that my grandfather, Robert Bartholomew, was one of the first five pilots commissioned by the fledgling US Army to be flight trainers just prior to WWI.  I recently saw your documentary on PBS (KCSM San Francisco) and realized that the documentary was about the times and people when my grandfather was in the army and that the planes he and his students were flying were Jenny’s.  As far as I know, my grandfather lived in the Northeast at that time, in or near New Jersey.  We would like to know if we can obtain a copy of your great documentary, Legends of the Sky! The Jenny, and who we should contact to find out more about the first training pilots for the US Army (air force).  Sincerely, Cynthia Fox

I’m glad that you enjoyed my film.  It was both a labor of love as well as a long overdue salute to men like your grandfather who many have forgotten.

Copies of the film are available either on line at www.peridotpictures.com  or my mail.

A great source for the early training of military pilots is the National Museum of the USAF in Dayton, Ohio.  I’m sure they may be interested to hear of your Grandfathers experience.

I’ve attached a couple of pictures of our flying Jenny in the first military colors. 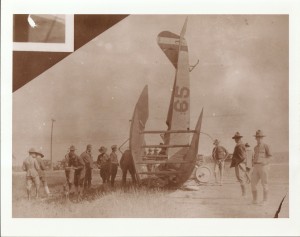 Thank you so much for your prompt response . . . (to) my family’s interest to find out more about the first training pilots for the US military.  I have a photo with a plane that looks to have the same military paint scheme as the Jenny’s in the beautiful color photos in your Email . . .  I also am sending a very good still shot of a Jenny from that same period . . . I would like to identify at what air field the photo of the Jenny was taken.

Best to you, Cynthia Fox

The caption for the “nosedown” image reads:

Photo circa 1917.  Robert Bartholomew (second from right with hands in pockets) was one of the first pilots in the US military and had many exciting flights as an instructor preparing pilots for WWI.  He was very disappointed after this crash because not only had the plane (an early Jenny) been badly damaged, but his new wristwatch – an unusual and expensive gift from his wife – had also been broken.

If you have any insight into helping Ms Fox identify the airfield location of either of these images please contact us via this website.