Filed under: Documentary, Legends of the Sky No Comments 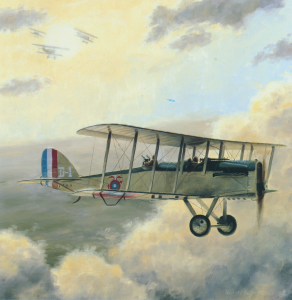 DH4 on patrol during WW1

It’s a story that has been waiting for the right time to be brought back to life.  The inspirational story of the challenge to create the first War plane in America is being told in the one-hour documentary, Legends of the Sky: the DH-4 Liberty Plane.  The very first aircraft that took America to War in Europe in 1918, would later win the nation’s first Transcontinental Air Race and establish the first US Air Mail transcontinental routes.

This documentary takes you back to the era where visionaries such as Glenn Curtiss, Orville Wright and Geoffrey de Havilland competed to build a newer, better, faster aeroplane for

America… as the drums of War were sounding in Europe.  Four of the eight Congressional Medals of Honor awarded to WW1 aviators were earned by DH4 air crews.  The DH4, with its 400 hp Liberty engine would later become the plane of choice to such greats as “the Lone Eagle” Charles Lindbergh and Jimmy Doolittle.  Stunning aerial images will be shot in H 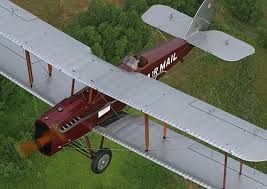 igh Definition, aviation experts will share personal stories, and historic newsreels and photographs never seen before, will help bring the story of the Liberty Plane to life. The film is a journey of discovery and adventure that  shares with the viewer the great impact that the DH4 has had on the growth of aviation and business worldwide.

The DH4 Liberty Plane will join the Legends of the Sky brand which currently includes the Curtiss JN4 Jenny airing on PBS. 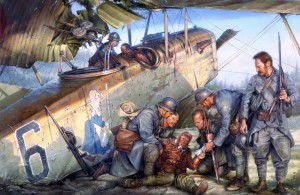 This John Shaw painting entitled “The Highest Possible Courage”, depicts his version of 50th Aero Squadron Lts. Goettler and Bleckley’s crash site after they were shot down trying to located and drop supplies to the men of the “Lost Battalion”.